This article sums up 10 biggest hydraulic excavators in the world used in 2022. Excavators are versatile machines suitable for large range of jobs such as excavating, mining and digging, which makes them the core of every heavy machinery fleet. These giants can be seen mostly around large mines and quarries in Australia, the USA, Canada or for example China. They often work in pairs with the biggest mining dump trucks in order to deliver maximum performance. The list of world’s largest excavators is based on the operating weight. 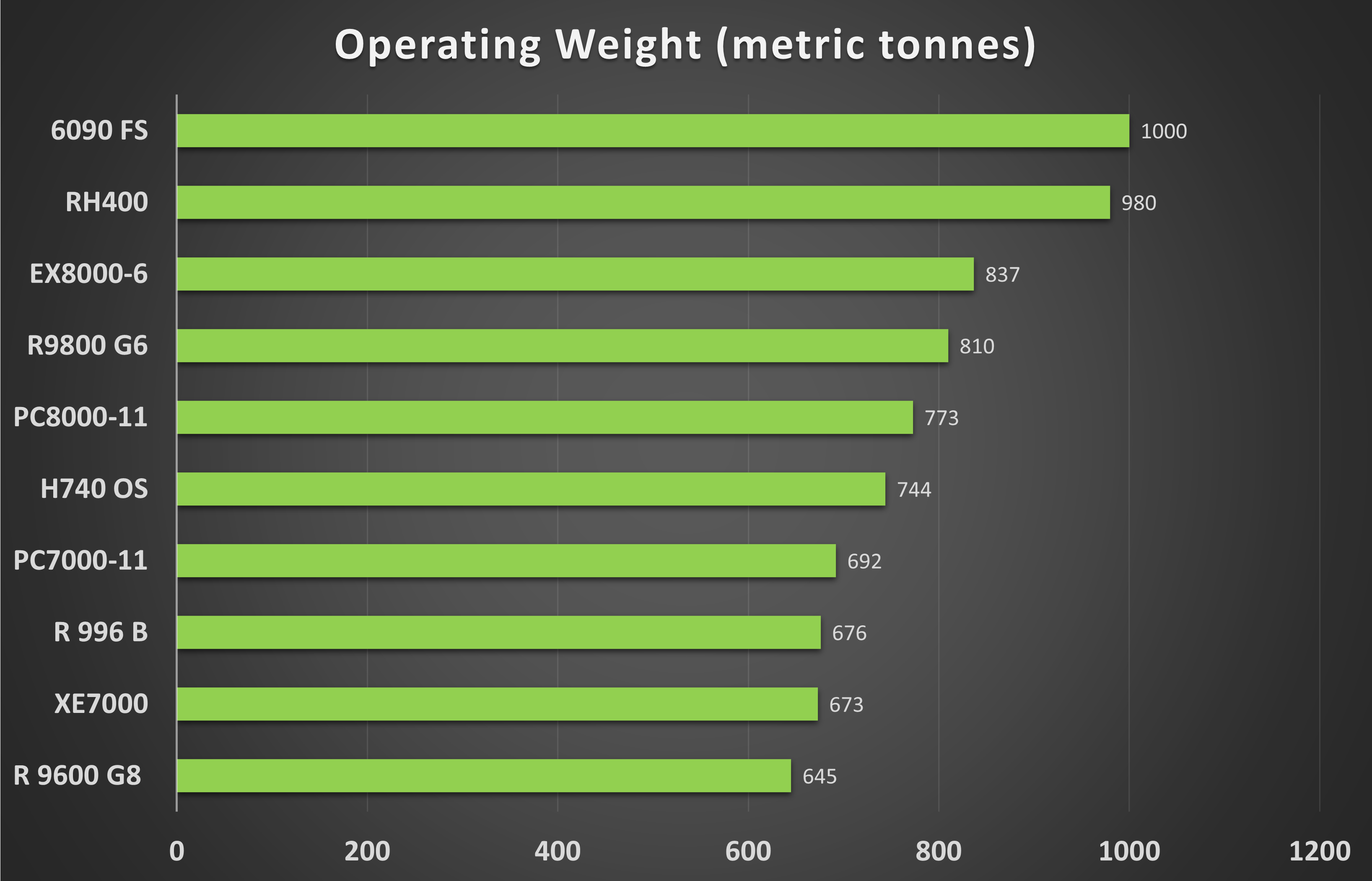 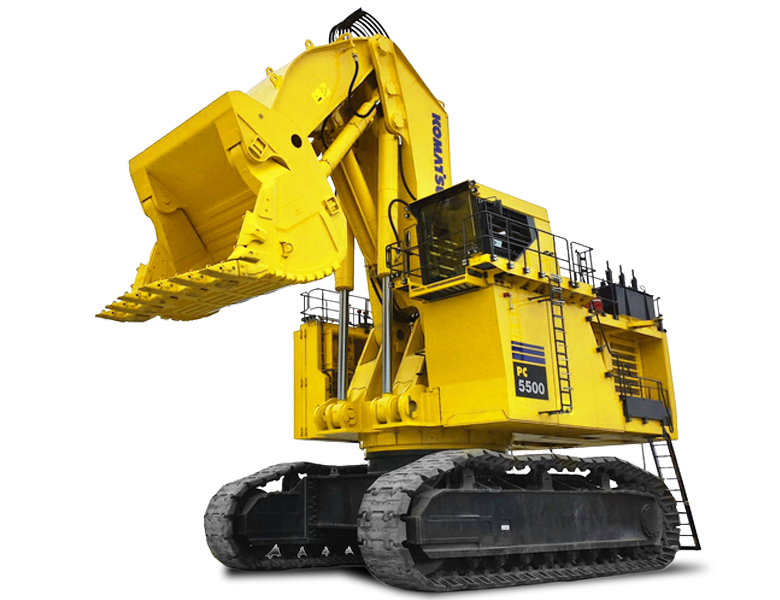 The successor and upgraded version of Komatsu PC5500 is the tenth biggest excavator in our list. Komatsu PC5500-6 mining excavator is available in two configurations, as a loading shovel or backhoe. The heavier backhoe version weighs 552 tons and offers tear-out force of 1,326 kN. Hydraulic crawler excavator PC5500-6 is powered by two Komatsu SDA12V159E-2 Tier 2 engines, each rated at 940 kW (1,260 HP). The machine is over 12 m long and 8 m high with backhoe capacity of 29 m³. Komatsu has sold more than 170 units of the PC5500-6 worldwide, making it quite popular model, especially on large jobsites in North America. 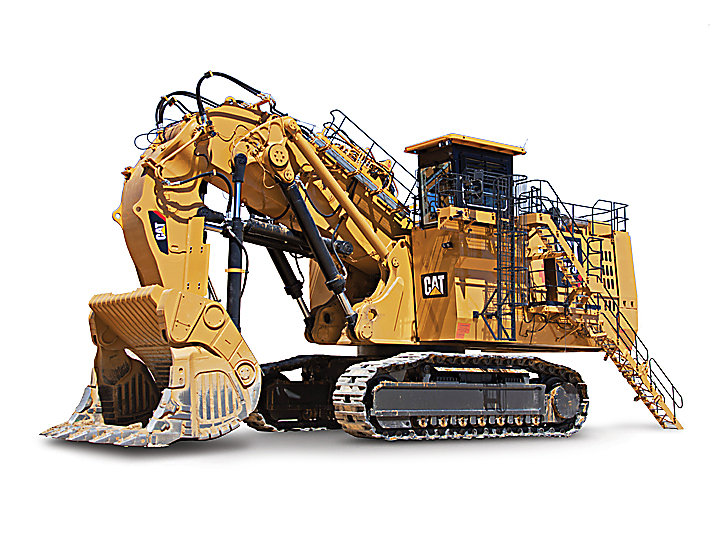 A special mention in our list of the largest excavators in the world belongs to Caterpillar 6060, also available with the front shovel attachment as CAT 6060FS. The concept of this large mining excavator is based on Bucyrus RH340, a previous Caterpillar’s flagship obtained after the acquisition of Bucyrus International in 2010. Caterpillar’s large mining excavator is equipped with 34 m³ bucket that is designed to fully load 220 t dump trucks such as CAT 793D and CAT 793F in exactly 4 passes. The required power to move the 6060/6060FS is delivered by two CAT 3512C engines rated at 1,120 kW (1,500 HP). This model has been marked as the  top-selling Caterpillar mining excavator. 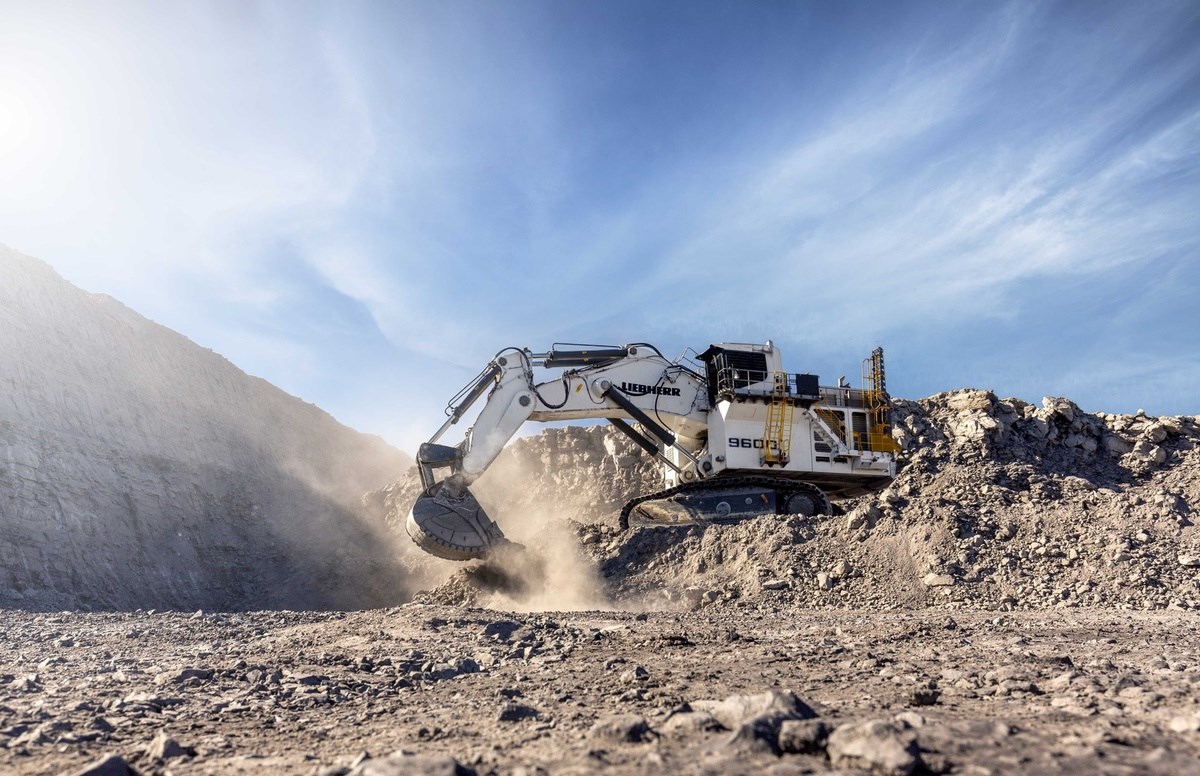 The R 9600 G8 is the newest addition to Liebherr's mining portfolio that was introduced at MINExpo International 2021. The crawler excavator was launched at the beginning of 2021 after years of development and experience within the mining industry. The model is a successor and the next generation of the popular R 996B model, which is currently not in serial production. The R 9600 was field-tested in Australia and the results revealed that the new generation excavator is 19.6% more productive and faster than its predecessor R 996B. Moreover, the R 9600 has a 40% less fuel consumption compared to R 996B. The white beast is equipped with two QSK50 Cummins engines rated at 2,500 kW, US EPA Tier 4f / EU Stage V compliant. Liebherr also plans to offer an electric drive version. The new Generation 8 features many technological features such as on-board assistants, redesigned cab or enhanced undercarriage. First 11 units of the R 9600 G8 were delivered last year to customers in Australia, where they will work in coal mines. 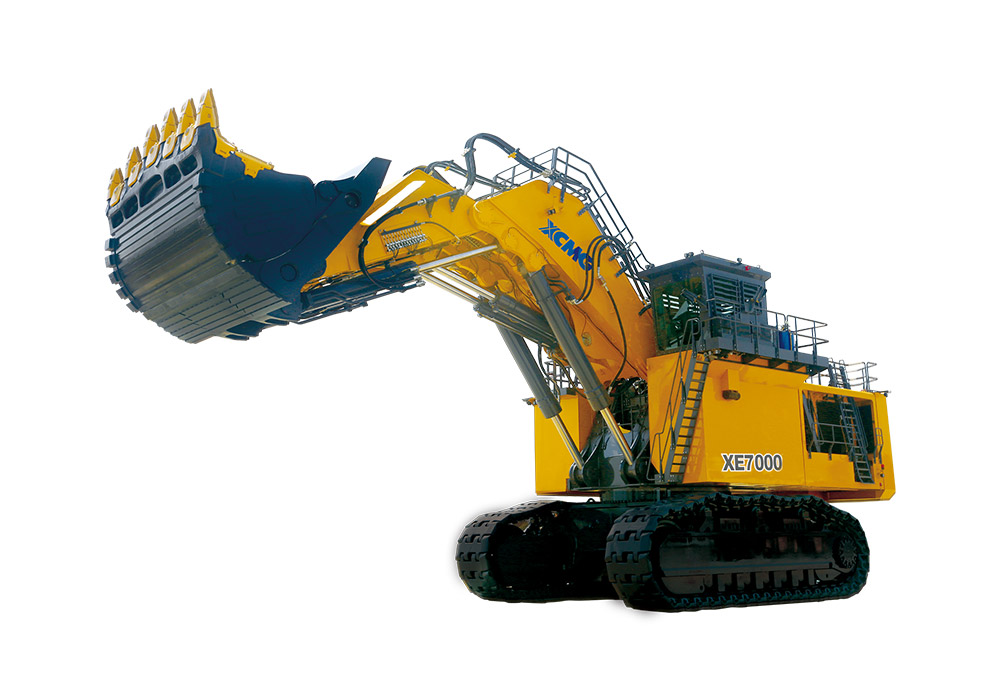 The XE7000 is considered the biggest Chinese excavator. China therefore entered the 700-ton mining excavator sector as the fourth country after the USA, Japan and Germany. Model XE7000 weighs 673 metric tonnes that are powered by two 1,193 kW (1,600 hp) engines. The maximum digging force of 167 tonnes (1640 kN) secures high performance. The XE7000 excavator is equipped with a 34 m³ bucket that is capable of holding around 50 t of coal with each scoop. Speaking in numbers, if this excavator would work all-day-long it would be able to load about 30,000 t of coal per day. Therefore, the XE7000 is designed to work in pairs with the largest dump trucks that have a loading capacity of 300-400 tonnes. The machine also requires a lot of space as it is 23.5 meters long. Moreover, XCMG also offers the XE7000E which is a version powered by two electro-hydraulic motors. The powerdrive delivers 2,500 kW (3,350 hp) in total. This version is a little bit lighter than the XE7000 as it weighs 660 t. The electro-hydraulic version can be equipped with even larger buckets that offer a maximum digging force of 2,270 kN and therefore the best performance. 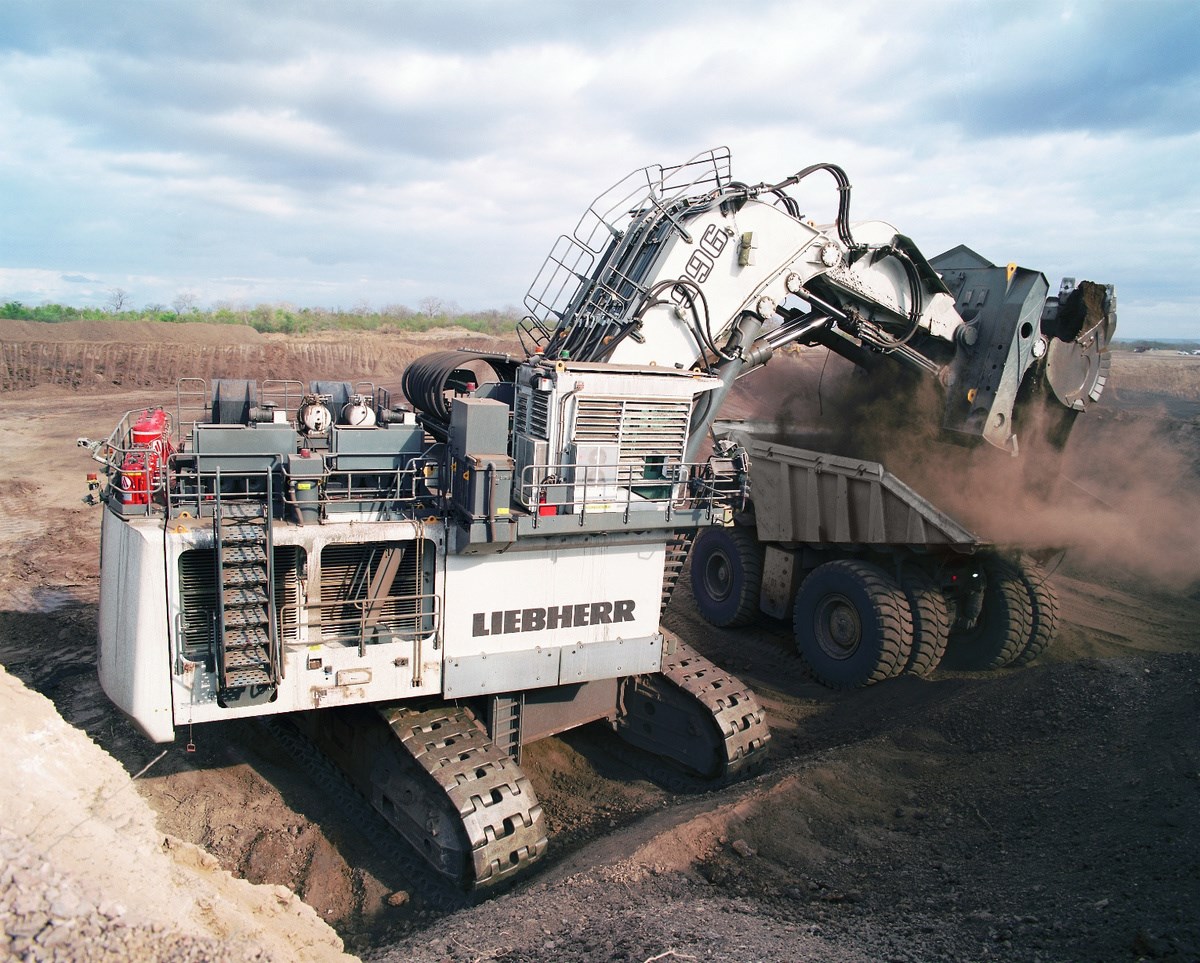 The R 996B is still Liebherr’s second largest mining excavator, however, it is just the eighth biggest excavator in the world according to our list. The machine, weighing up to 676 tons, is powered by two Cummins K1800E engines of total 2,240 kW/3,000 HP. The digging force is 1,535 kN provided by backhoe of 36 m³ capacity. Liebherr R 996B is designed for the most challenging missions as it can be equipped with optional arctic kit for regions with temperature down to -50 °C / -58 °F. Nevertheless, one can also find the R 996B crawler excavators at coal mines in Australia and Indonesia, where the conditions are much warmer. 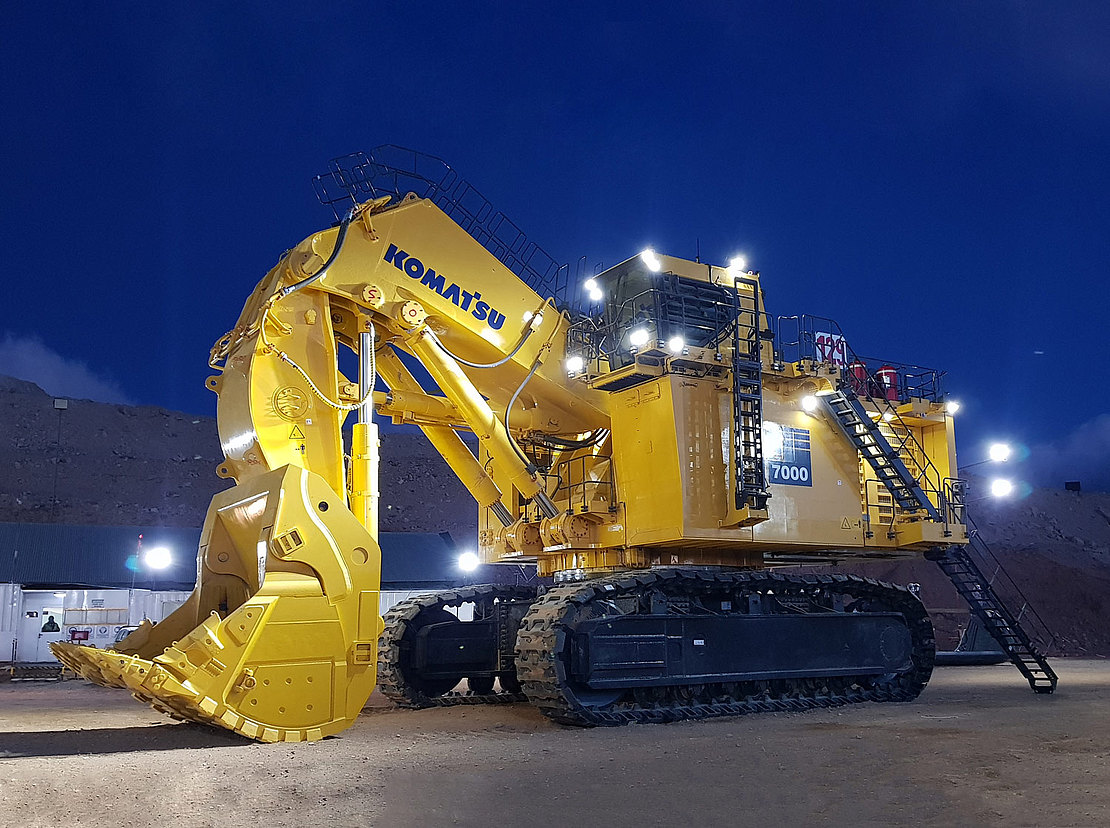 Komatsu PC7000-11 is the latest hydraulic excavator in Komatsu’s product range and the seventh biggest excavator in the world. It is based on PC 7000-6, however, the newer dash 11 version features up-to-date electronics and electro-hydraulic controls. The latest technology includes the Komtrax Plus 2 and Simplified System. Komatsu also focuses on operation monitoring and big data analysis, both available for the operator/mine manager. This giant is powered by two 16-cylinder Tier 2 diesel engines that are rated 2x 1,250 kW/1,675 HP. The first ever PC7000-11 model was shipped to a gold mine in Argentina in February 2019. The machine was then assembled on site—the process took over 4 weeks. 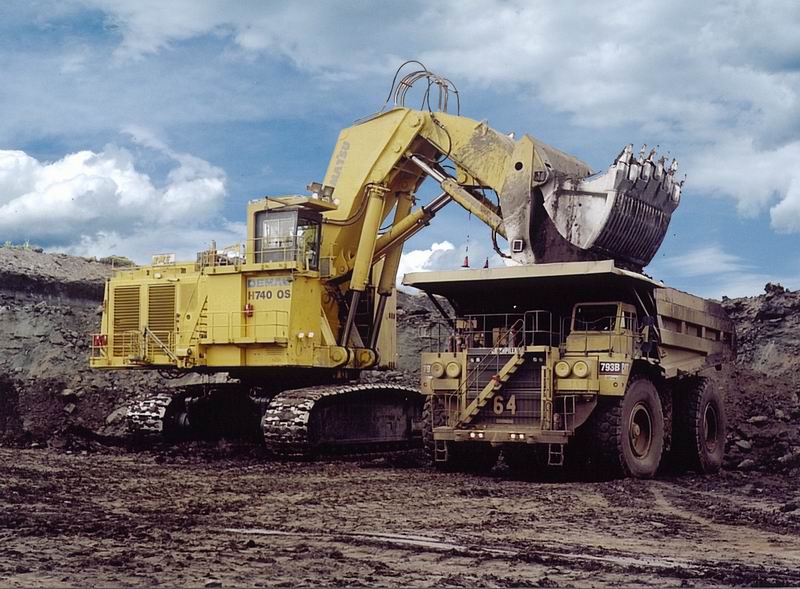 The sixth world’s largest excavator in our list is Demag H740 OS. Specially designed for KMC Mining, this machine has been in service since 1999—operating at oil sands in Alberta, Canada. The Demag H740 OS is a front-shovel hydraulic crawler excavator with loading capacity of 40 m³. The operator does not need to worry about the lack of digging power as the excavator offers 2,320 kN of breakout force. Demag H740 OS is powered by two 16-  cylinder CAT 3516B DITA diesel engines that provide 3,280 kW/4,000 HP in total. 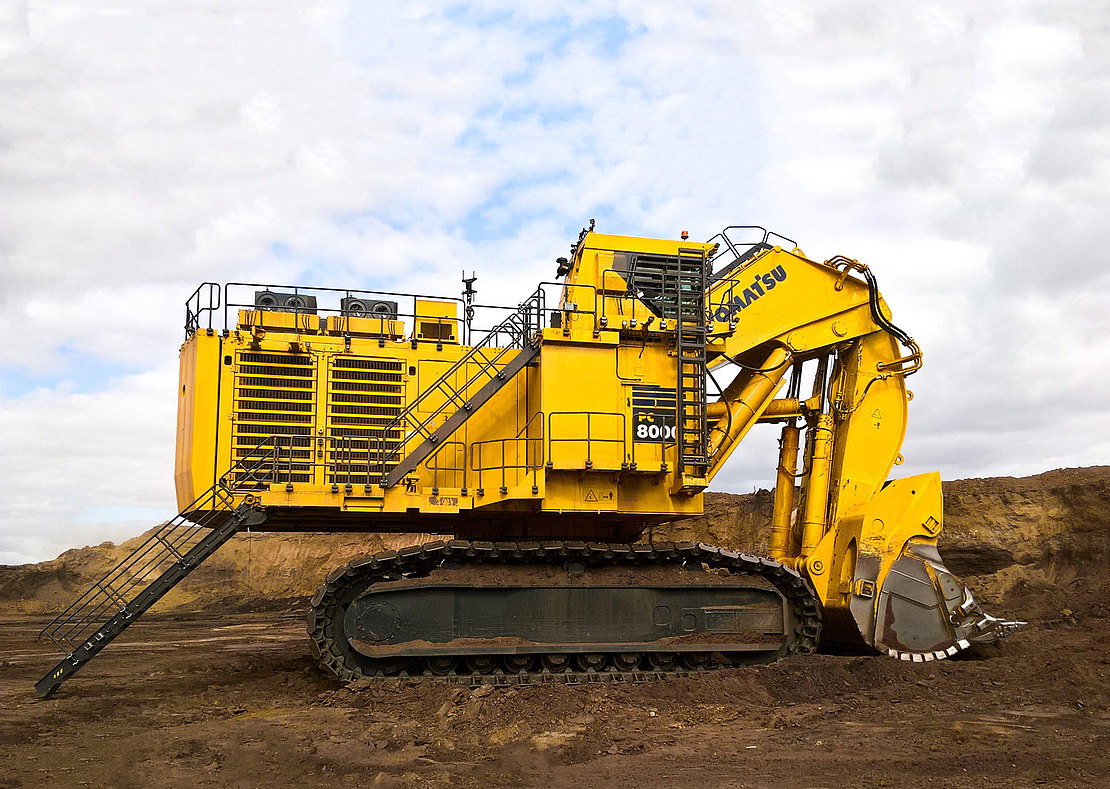 Komatsu PC8000 is the world’s fifth largest hydraulic excavator and the biggest mining excavator in the Japanese manufacturer’s product portfolio. Komatsu has recently introduced a new version called PC 8000-11, which is based on popular PC 8000-6. This giant is offered in both backhoe and front shovel configuration, weighing up to 773 tons. The PC8000-11 is, similarly to PC7000-11, equipped with the latest electronics and telematics by Komatsu. It is able to digg 8 m deep and provide tear-out force of 1,813 kN. The 42 m³ backhoe/shovel are designed to match 240-400 U.S. ton trucks. The power to move this large excavator is distributed via two Komatsu Tier 2 (choice of Tier 4) diesel engines of total 3,000 kW/4,020 HP. 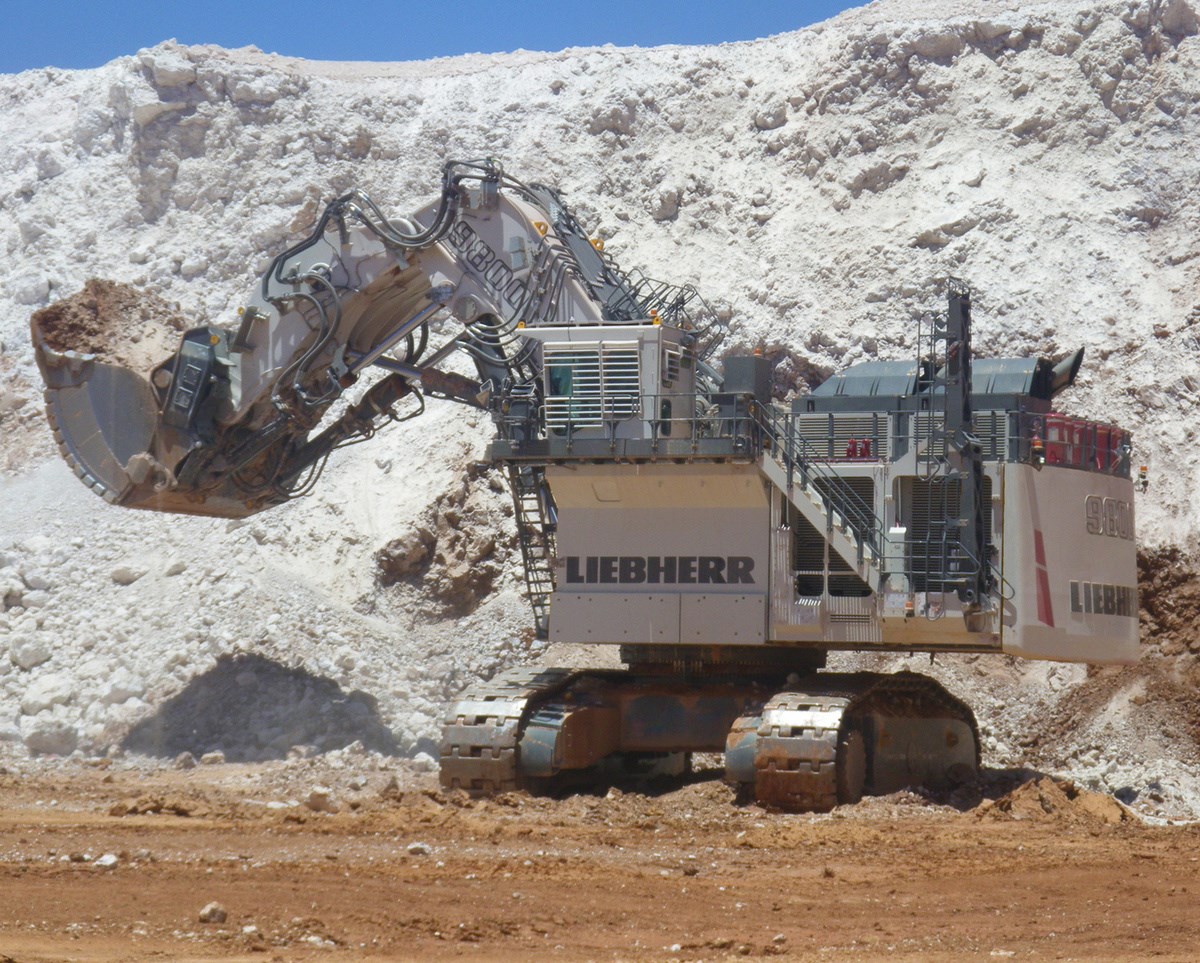 Developed for large-scale operations, Liebherr R9800 is the fourth largest hydraulic excavator in the world. The colossus is offered with backhoe or shovel attachment and weighs up to 810 tons. The R9800 excavator is designed to pair with T 264 and T 284 Liebherr mining trucks in order to maximize its productivity. It can be equipped with a diesel engine or an electric drive version of 2,984 kW/4,000 HP maximum power. The digging force of the backhoe is 1,760 kN. The R9800 features the Litronic Plus power management system providing electronic control over different machine functions. In 2019, Liebherr introduced the new Generation 6 model update that features technological innovations and cost-effective solutions. 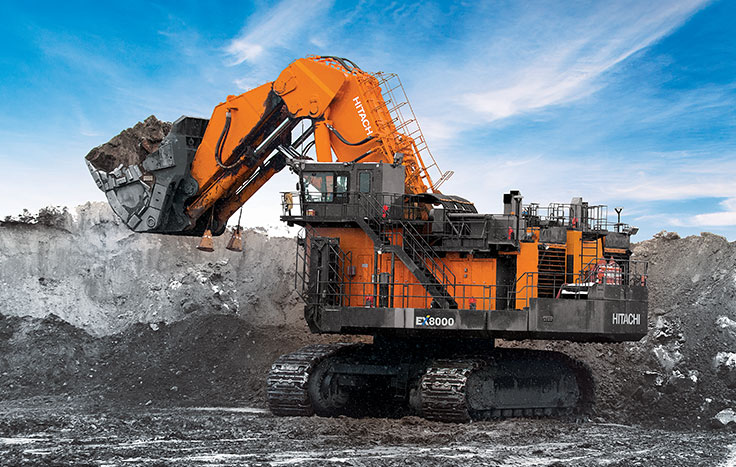 Hitachi states that one-third of all hydraulic mining excavators across the world are Hitachi. Launched in 2012, the EX8000-6 is the largest Hitachi mining excavator and the third biggest excavator in the world, weighing up to 837 tons. The durable machine can be fitted with 40 m³ load shovel or 43 m³ backhoe bucket, which are designed to load Hitachi EH4000AC-3 dump truck in three passes or the largest Hitachi dump truck EH5000AC-3 in five passes. The EX8000-6 is equipped with two Cummins QSK60C engines, each rated at 1,450 kW/1,944 HP. The excavator features maximum digging depth of 13.8 m and digging force of 2,230 kN. 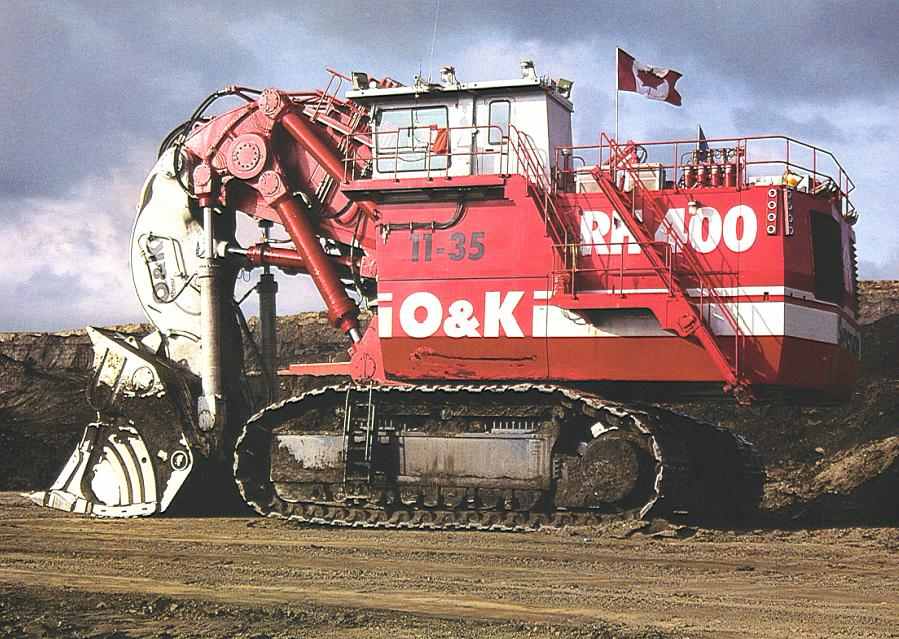 The RH 400 is currently the second largest hydraulic excavator in the world. The behemoth was first launched as Terex RH 400 in Germany in 1997. Just one year later, Terex acquired the O&K Mining and added its company name into the model name. However, Terex sold its mining division to Bucyrus in 2010 and the model was renamed to Bucyrus RH 400. The excavator is able to scoop up around 9,900 tons of material every hour, setting a new world record for a hydraulic mining excavator. The 50 m³ shovel is over 6 m wide, weighs 84 tons and is able to hold 85 tons of material in a single scoop, which can easily fill any mining truck in 3-5 passes. The RH 400 is powered by two engines with total 3,360 kW/4,500 HP and it requires 6 car-batteries just to start the engines that produce max. travel speed of 2.2 km/h. 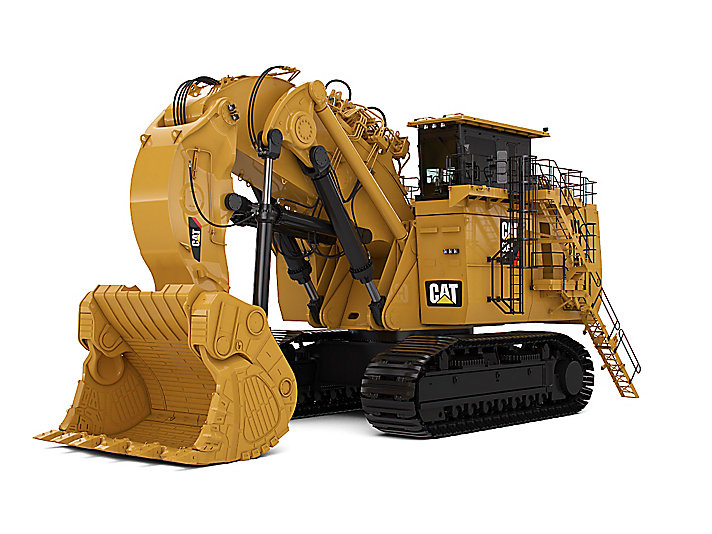 The world's largest excavator is currently Caterpillar 6090 FS. The model is based on Bucyrus RH400, because Bucyrus was purchased by Caterpillar in 2011, expanding its mining division. However, the 6090 FS features more durable components, hardened undercarriage, enhanced oil-flow system and hydraulics, better customer service support, LED working lights for night shifts or innovative on-board electronics. The weight of Cat 6090 FS mining excavator reaches an incredible 1,000 tons. The goliath is equipped with two Cummins QSK60 engines, rated at 3,360 kW/4,500 HP in total. The 52 m³ shovel has a payload of 93.6 tons and it takes just 4 passes to load the largest Caterpillar dump truck, the 797. 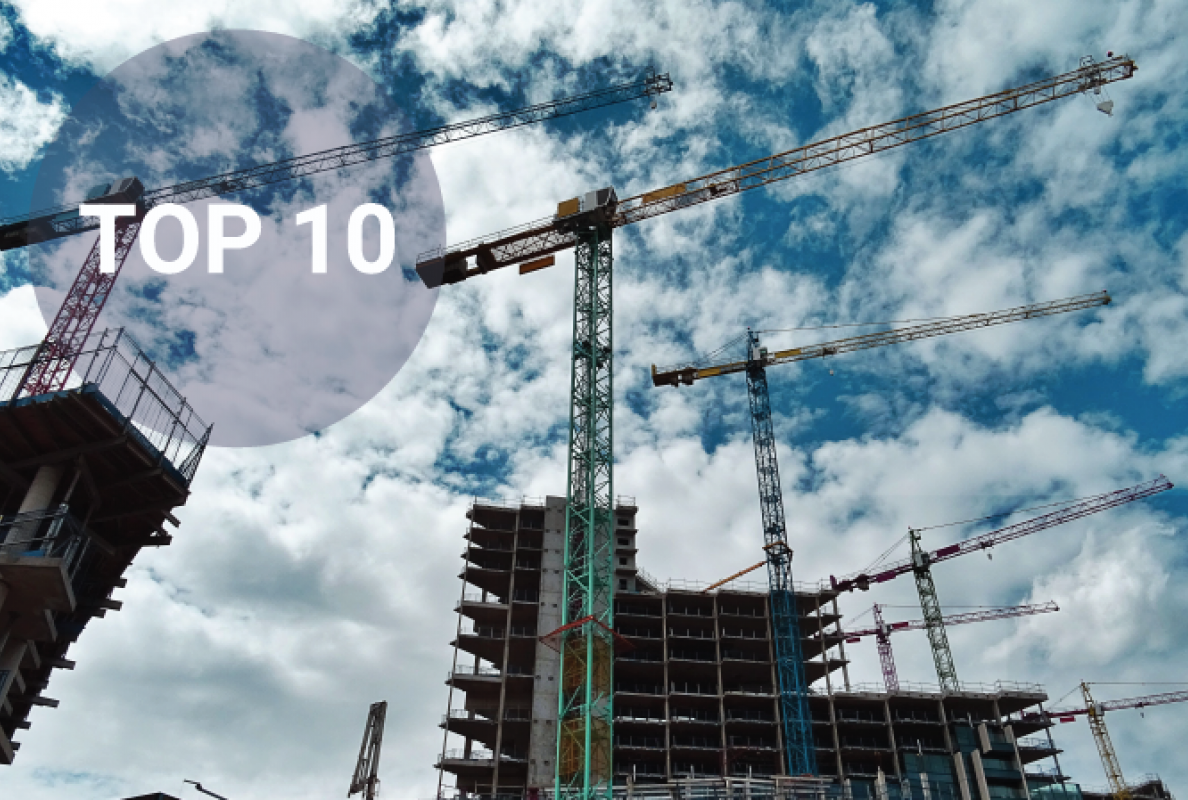 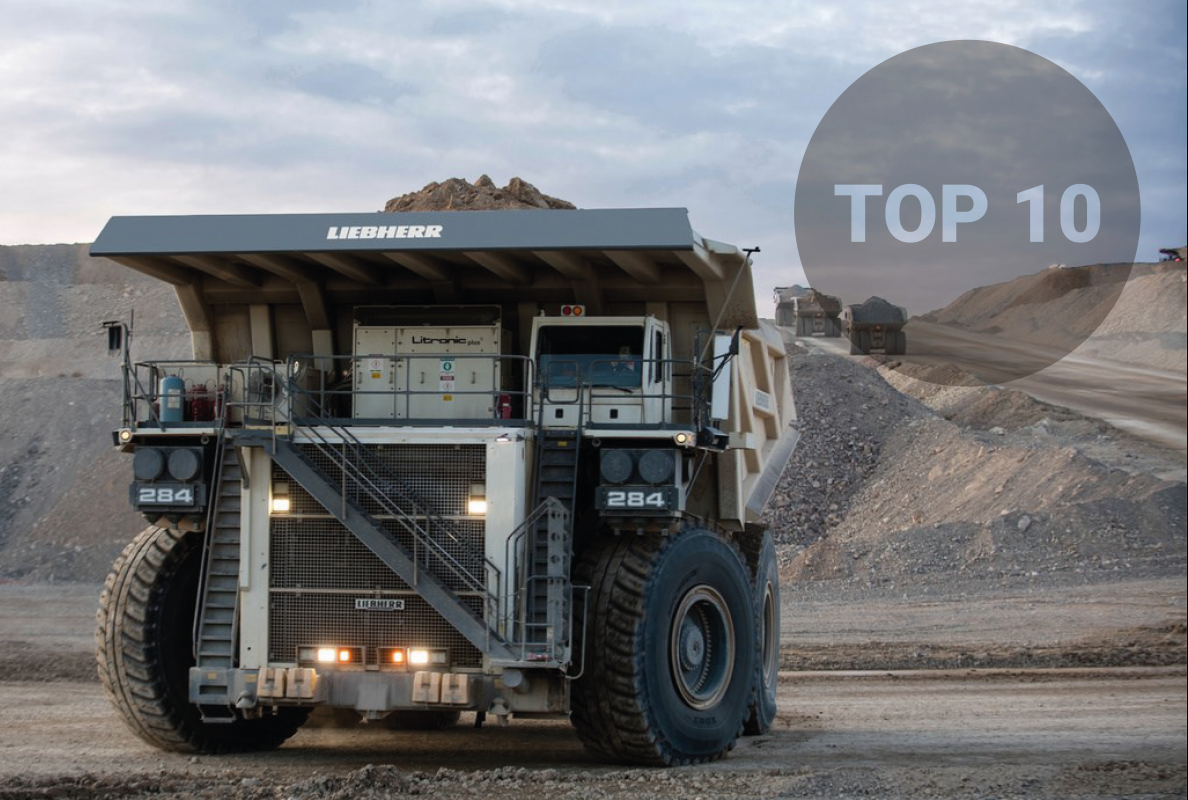 What is the biggest excavator made?

What is the biggest CAT excavator?

How much does the biggest cat excavator weight?

The biggest Caterpillar excavator is the 6090 FS weighing 1,000 tonnes, which approximately equals 555 cars.

What is the largest hydraulic excavator in the world?

Caterpillar 6090 FS is currently the largest hydraulic excavator in the world equipped with 52 m³ shovel and operating weight of 1,000 tonnes.

Who has the biggest excavator?